We did this activity in the Copenhagen, Denmark Stake in the Soborg ward yesterday April 11th 2010, and it was really really fun.

To illustrate to the children the confusion Joseph Smith at felt at the many Churches and conflicting messages about the truth we did the following:

I asked two brothers to act as priests of two different Churches. In a corner of the cultural hall we set of chairs and a pulpit and the pastor was dressed in black with a white collar.

In the Primary chapel we set up the second church with a priest dressed in a big weird hat and draped in white cloth…. looking very different from the first one, and very strange.

We are lucky enough to have too fairly good size primary rooms, so all the children was led to the other activity room, where they sat on the floor and was told that they were children in family in 1820. They had no computers TV, electric lights etc….. and we told then to lay down and go to sleep, because tomorrow it was Sunday and they had to go to Church at two different churches. One with mom one with dad. We sang a lullaby and they all slept “nicely”.

Sunday morning we woke and dressed for church and walked in two rows arm in arm to the first Church in the cultural hall.

The pastor greeted us with dramatic Hallelujah’s and proceed to preach in a dramatic funny voice.

All the kids were enthralled and paid great attention.

The pastor preached: God says it’s against his laws to chew gum…… I tell you it’s very very evil to chew gum. No one who chews gum will be able to enter into the kingdom etc….. Halleluja….. We had the kids repeat the hallelujah many times to get the the feel of something very different that they are used to. The pastor also said: The lord says: Thou shall not cut with sharp scissors because this is very bad for you…… etc. etc. etc.

The kids had a chance to react and ask some questions…. and the priest told them he had bought this church after he had studied at the university.

Then we walked back to the main Primary room and met the second priest who was very different from the first one. He was ceremoniously dressed and spoke in a monotone voice… introducing yet gain new doctrines to the children. The kids were curious, laughed, and even told him he was wrong about the things he said.

We wrapped up the activity with a very brief account of how Joseph Smith felt when he was 14 and was so confused about all those churches. We then taught the kids the song “I belong to the Church of Jesus Christ” realizing that many of our younger classes did not know it yet.

It was a great “object” lesson that very clearly made the children understand the message. 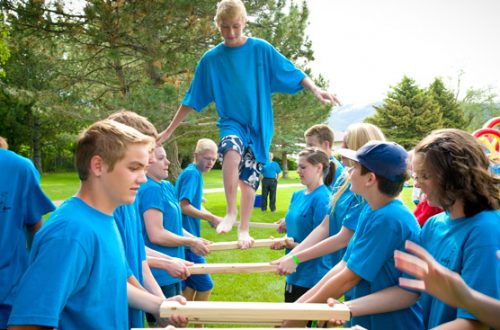