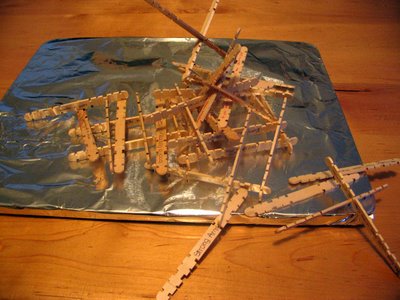 [example of student work – to see up close, click on picture]

I started off by drawing a city silhouette on the board and then asked the students, “Of all the cities you could live in, which one would it be and why?” (from the lesson manual)

The students call out a variety of cities and places, in addition to why the students wanted to live there.

Then we took turns reading, a verse at a time, from the following scriptural selections:

As we read, I wrote summaries under the heading: CITY OF HOLINESS.

I asked, “Are you ready right now to move to such a city, if one were present? Would you feel comfortable being in the presence of those who are pure and who unabashedly serve the Lord?”, etc. (using the phrases from the scriptures one at a time as a measuring stick)

I said, “If we’re not quite there yet, Moroni gave us the remedy in Ether 2:8. Please turn to it.” We then did a choral reading, where we all read the scripture out loud (I’ve found this helps the sleepy students to pay attention).

Then I asked the class, “But what is going to happen in the history of our world before the cities mentioned in the scriptures are built/return?”

We turned to the following verses and the students read them out loud, each student taking one verse:

So which do we choose? To live so we match the world of sin and chaos with equal rebellion, receiving thereby the fruits mentioned in D&C 45 and 88? Or do we prepare ourselves and focus on living after the pattern of the City of Holiness?

Are we ready for such a thing? If still present on the earth, will we be found worthy to build these great cities of holiness? If we are holy, we just might!

But is it easy in our world today to ignore the siren call of sin? Absolutely not! So what to do? Well, history is a great teacher, so as a class we turned to read about a society of individuals who refused the call of holiness – those living during the time of Coriantumr and Ether.

I passed out four popsicle sticks (the kind with notches in them – can be found at a craft store). I split up Ether 13-15 amongst the class (i.e. each student received 6 verses to study).

The students were to:

I gave the class about eight minutes or so to research these items and write each one on one of their popsicle sticks.

Once the class was finished, I brought out a large cutting board wrapped in tinfoil. I explained that when we build our lives on the slippery slopes of sin, our foundation is very poor and it’s difficult to maintain the structure.

Beginning with the student that had the first six verses in Ether 13, each student came forward in chronological order to share what had happened in the story and then the spiritual lessons that could be learned from those verses. After they shared, they then added their sticks to try to build a city.

Most of the students seemed to have a great time trying. You can see the result at the picture up at the top. When people or civilizations flaunt teachings of the Lord’s prophets, their foundation is unsure and destruction will become no longer pure theory at some point.

Rather, when cities and civilizations are built upon solid gospel truths, their foundation becomes much more sure. I bore testimony as to the importance of living the gospel so that our hearts will not fail us during this sojourn on earth, and to live in such a way that no matter where we live, we are building a “city of holiness” for the Lord.

I shared that not all around us will make the same choice. Christ even said in Matthew 10:34-39:

36 And a man’s foes shall be they of his own household.

38 And he that taketh not his cross, and followeth after me, is not worthy of me.

39 He that findeth his life shall lose it: and he that loseth his life for my sake shall find it.

The Jaredites were faced with this same decision…as are we. I also read the quote from Elder Richard G. Scott:

In essence Elder Scott is saying that by losing our life in the Lord, we will find it – and true happiness. Which is NOT to imply that we ignore our families; to the contrary, we are to love and serve them in every righteous way possible – we just are not to follow them down pathways which displease the Lord.

I shared with the class that this obviously isn’t always easy, or everyone would do it. Who doesn’t want true happiness? But the choice is waiting there for us nearly every day.

I shared how my parents were not able to go into the temple with me when I married. As a result, initially they were not going to attend any of the receptions. But they relented and went to one. In the following weeks, they decided to throw a wedding gathering and celebration, about six months later, for all the relatives. The festivities were to be all weekend long, including a Sunday.

My family and distant relatives all gathered to my parents’ home – and then went to a famous resort…without my husband and myself. I loved them and expressed gratitude for the gathering and enjoyed the Friday and Saturday activities with my loved ones.

But I could not follow them to the resort to play and have fun on a Sunday – even though it was for my wedding celebration. Oh, I could have justified and rationalized going in many, many ways. But I also could not deny the spirit which BOTH my husband and I had felt that it was not appropriate.

I told my class today that decisions like these aren’t easy AND they are most definitely individual ones. But the spirit had told, in my particular instance, what my choice needed to be.

When it really comes down to it, the pressing issue is spoken well in hymn 260,

Our job is to prove we are there first and foremost for the Lord, no matter the difficulty it might create or how awkward it might be.

Is there a commandment which has been given? We are to live it. Is there a request or counsel from the Lord? We are to heed it. Are there lives to be touched and served? We are to do it. And these are the steps which lead us to building a “city of holiness”, not only within our hearts, but all around us.