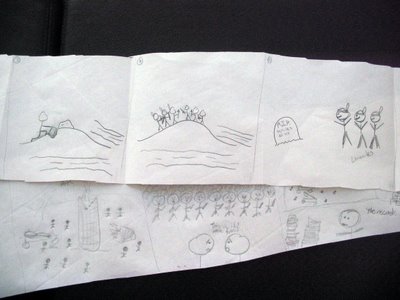 Today we began to cover Mormon 1-6. I distributed 30 inch long strips of paper, approximately 5 inches wide (I’d cut these from a blank roll of newsprint paper). I’d drawn lines on each strip to divide it into seven equal sections.

The first and last section I’d drawn a big X through the square, so that the kids wouldn’t use those squares (they’d be needed later to pull the scene strip through our B-HVNLY “screen”).

Each team had two students on it (since I was assigning six chapters from Mormon and I have twelve students – this obviously can be varied depending on class size).

Each team had one chapter to research deeply. They were to tell the story of what happened in their chapter through five different, chronological scenes drawn on their strip of paper. While studying their chapter, they were to look for an important principle they learned from their assigned content. When they came across what moved them spiritually, they were to record that verse on the back of the scene strip to eventually share with the class.

So today they studied in teams these very poignant chapters recorded for us by Mormon. Tomorrow they will present to each other what they’ve discovered.

APPLICATION:
I’ve found that when the students periodically participate in these hands-on kinds of experiences, it brings about a deeper immersion in gospel precepts by leading them to:

Once they were finished with their scene strips, we then read each of the headings of Mormon 1 through 6 as an “advertisement” for the what the students would be sharing in greater depth tomorrow. Now to wait for their presentations at our next class!